Skip to content
April 16, 2012August 7, 2013 taryn
Before I became sugar free I was the baking queen.
There were always pikelets or brownies or muffins or something sweet cooking in my oven.
When I stopped eating sugar, I stuffed around with a lot of dextrose and stevia and all those other sugar substitutes. But you know what? I don’t want to eat sweet food anymore so I don’t make them. If I do, it’s usually only out of guilt of depriving the kids of their Tiny Teddy’s.
So I’m in the kitchen still (a lot) but you won’t find my benchtops covered in choc bits.
Here is a recipe I developed for the Thermomix. This one made recipe of the day last week on the Thermomix Recipe Community (yeah such a show off I know!) you can find it here. 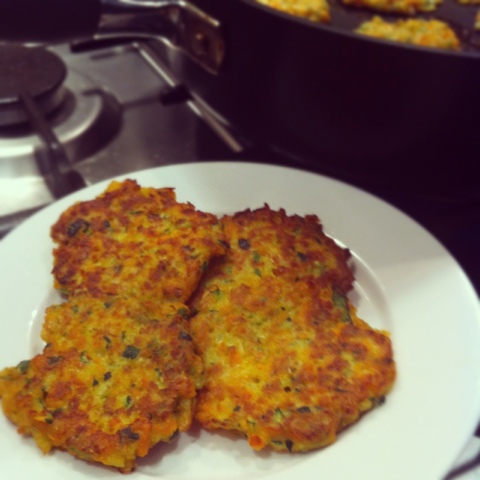 For those of you who don’t have a Thermomix here is the recipe:
Very Veggie Fritters
1 Large peeled carrot

Grate all vegetables either by hand with a grater or using a food processor. Add egg and flour and combine well, add salt to taste.
Heat Olive Oil and butter in a frypan. Gather mixture with your hands to make little patties. Cook on both sides until golden brown.
Serve with a little cream cheese, topped with grated cheddar cheese.
Makes a great party food. Top them with cream cheese and smoked salmon.
NOM NOM

View all posts by taryn